It's quite difficult to write a book, edit it, rewrite it, polish it and put it out there for possible cruel rejection. Having got an agent (just pausing to pinch myself) I'm now aware I have to come up with a credible 'second album'. Although I just wrote a book I liked, rather than tried to think in terms of markets and editors, I wonder if I shouldn't be so relaxed this time.
Agents and editors want career writers, not one book wonders. I had already started A Baby's Bones, and was enjoying the story of Sage and her uncovering of the past, but I'm aware it probably wouldn't make a good second book for The Secrets of Life and Death. I've left Jack and Sadie bloodied and bruised, and they need to work out where they are going (and so do I). Writing a credible follow up (I hate sequels and trilogies) is sensible but I'm not sure how to go about it.
So I've looked around at second books that follow a strong first. Some of them are, frankly, a bit weak, especially those that are written as the middle of a trilogy. I loved Phillip Pullman's His Dark Materials trilogy but The Subtle Knife feels like the weakest to me. The novelty of the world building in the first book, Northern Lights, is over and the story is building to a big finish in The Amber Spyglass.
I feel a pressure to go even bigger than book 1, as if there has to be an escalation. I suppose unless I do sell a book, and the editors there suggest a direction, I'm in limbo, and I can carry on writing for myself. It's a rather nice feeling. In the meantime, Jack and Sadie seem to be working on a  conundrum that might yet throw up the right antagonists. Otherwise the book is going to have to be called: Jack and Sadie go Gardening.
Posted by Rebecca Alexander at 18:42 3 comments:

Things have moved on

Borrowed Time is being renamed! As I worked on the edits, the agent came up with The Secrets of Life and Death. So I rearranged the whole historical strand and am much happier with the book. It's off for line editing, and then on to be prinked and tidied and ready for an editor to look at.


Meanwhile, I have started looking at the next book in the series, easy as I have a major plot from my first draft of Borrowed Time (as it was) that I discarded because the one I eventually used was better for characters that didn't know or trust each other. Now they have formed a prickly unit, they are ready for a different kind of challenge.


Like the first book, there is a second story strand - this one the history of the place itself, weaving its past into the present. It's distracting me from waiting - which I have never been good at.
Posted by Rebecca Alexander at 15:39 No comments: 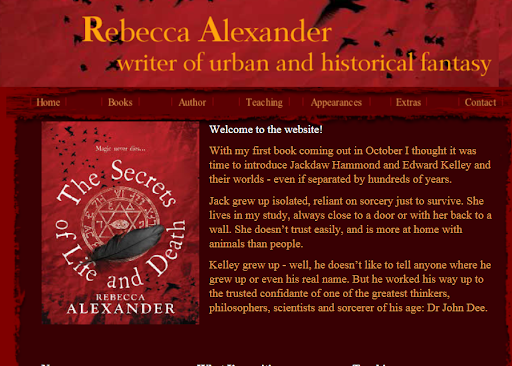 Rebecca Alexander
North Devon, United Kingdom
I'm a writer living in Devon. I have completed an MA in Creative and Critical Writing, and have specialised in novels. I have finished 'The Secrets of Life and Death', its sequel 'The Secrets of Teeth and Bone' (provisional), and the series prequel, 'A Baby's Bones'. I am represented by Charlotte Robertson of Aitken Alexander Associates and my first three books will be published by Del Rey UK, of Random House/Ebury.